Optimizing the permutation algorithm of hop.nvim

It’s been a while since I haven’t written something here. Today was a very exciting day to me as hop.nvim has been receiving more and more attention (and great contributions) from the Neovim community lately. I didn’t expect people to adopt Hop that quickly and getting actually interested. So, thanks for all the feedback and the great support!

Before starting up, if you don’t know what hop.nvim is, here’s a small excerpt from the README:

Hop is an EasyMotion-like plugin allowing you to jump anywhere in a document with as few keystrokes as possible. It does so by annotating text in your buffer with hints, short string sequences for which each character represents a key to type to jump to the annotated text. Most of the time, those sequences’ lengths will be between 1 to 3 characters, making every jump target in your document reachable in a few keystrokes.

Today, I want to talk about something at the core of the design of Hop: permutations, and a new algorithm I implemented to (greatly) optimize permutations in Hop.

Disclaimer: it might be possible that the algorithm described here has an official name, as I’m using a well-known data structure, traversing in a way that is also well established. Even though I came up with it, I don’t really know whether it has a name so if you recognize it, or think it is similar to something, feel free to tell me!

When you run a Hop command (whether as a Vim command, such as :HopWord, or from Lua, like :lua require'hop'.hint_words()), Hop is going to place labels, called hints, in your window, over your buffer, describing sequences of keys to type to jump to the annotated location in the buffer. Those key sequences are generated as permutations of your input key set, of different lengths. Your input key set is basically the set of keys you expect to type to hop around. For instance, the default key set is made for QWERTY and is:

Until today, I had implemented a single algorithm doing this. Let’s describe it so that I can introduce the actual topic of this article.

In functional programming languages, we call that kind of co-recursion an unfold. We stop building / generating when meeting a condition. In our case, the condition is when we reach the number of permutations to generate. This first algorithm had several constraints I wanted satisfied:

We already saw 1., so let’s talk about the three remaining points. Taking into account the key set of the user, with this algorithm, is done by splitting it into two sub-sets:

How to know which key is terminal and which is sequence? Well, I use a simple parameter for that, that can be modified in the user configuration of Hop: term_seq_bias (:help hop-config-term_seq_bias if you are interested). It is a floating number parameter specifying the ratio of terminal vs. sequence keys to use. Imagine you have 100 keys in your key set (you typically will have between 20 and 30), setting this parameter to 3 / 4 makes it use 75 terminal keys and 25 sequence keys.

This algorithm is interesting because it allows people to bias (hence the name) the distribution of terminal and sequence keys. However, it is pretty obvious that this algorithm does a pretty poor job at minimizing the overall number of keys to type: it will minimize the number of keys to type for short hops, mostly around the cursor and at mid-distance. I highly advise to use either 3 / 4 or even 0.5 for the bias value. Other values yield… weird results.

The problem and finding a solution

Very quickly, I have noticed something a bit annoying with Hop. Even though it is pretty fast, the distribution of keys for long jumps is often using 3-sequence permutations. And where does it make sense to use Hop the most? For mid to long range jumps. Vim and Neovim are already pretty good at short jumps. For instance, jumping to characters on the same line can be achieved with f and F. If you want to jump to a word on the line above, you can just press and use horizontal jumps.

I don’t necessarily agree that those are always ideal (and, well, I do use Hop for short hops too), but the situation is not ideal for long jumps in Vim / Neovim. See, I’ve been using Vim and Neovim for more than 12 years now, and I’ve seen lots of people using it. Most of the time, what people use for long jumps is either (or a combination of) one of these:

Among all those options, even when you combine them, you will always have to type more keys / take more time to do long jumps. For instance, considering we can jump with f to our location l because it is unique on the line we want to go to, assuming it’s on line 1064, 45 lines above our cursor:

So clearly, Hop should help for those jumps as much as possible, and the previous algorithm, even though already an enhancement over typing relative numbers or real line numbers, can still be enhanced. It is already pretty good because it will provide you with, most of the time, between 1-sequence and 3-sequence permutations. For long jumps, assume the longest: 3 keys, plus one key to trigger the Hop mode, you get 4 keys to type at most to jump anywhere.

The goal is to reduce that to 2 keys, i.e. 2-sequence at most, most of the time — 3 keys if you count the key to start Hop. In order to understand the concept of this new algorithm, let’s focus on what was wrong with the former. Consider the following, using abc as terminal keys and de as sequence keys: 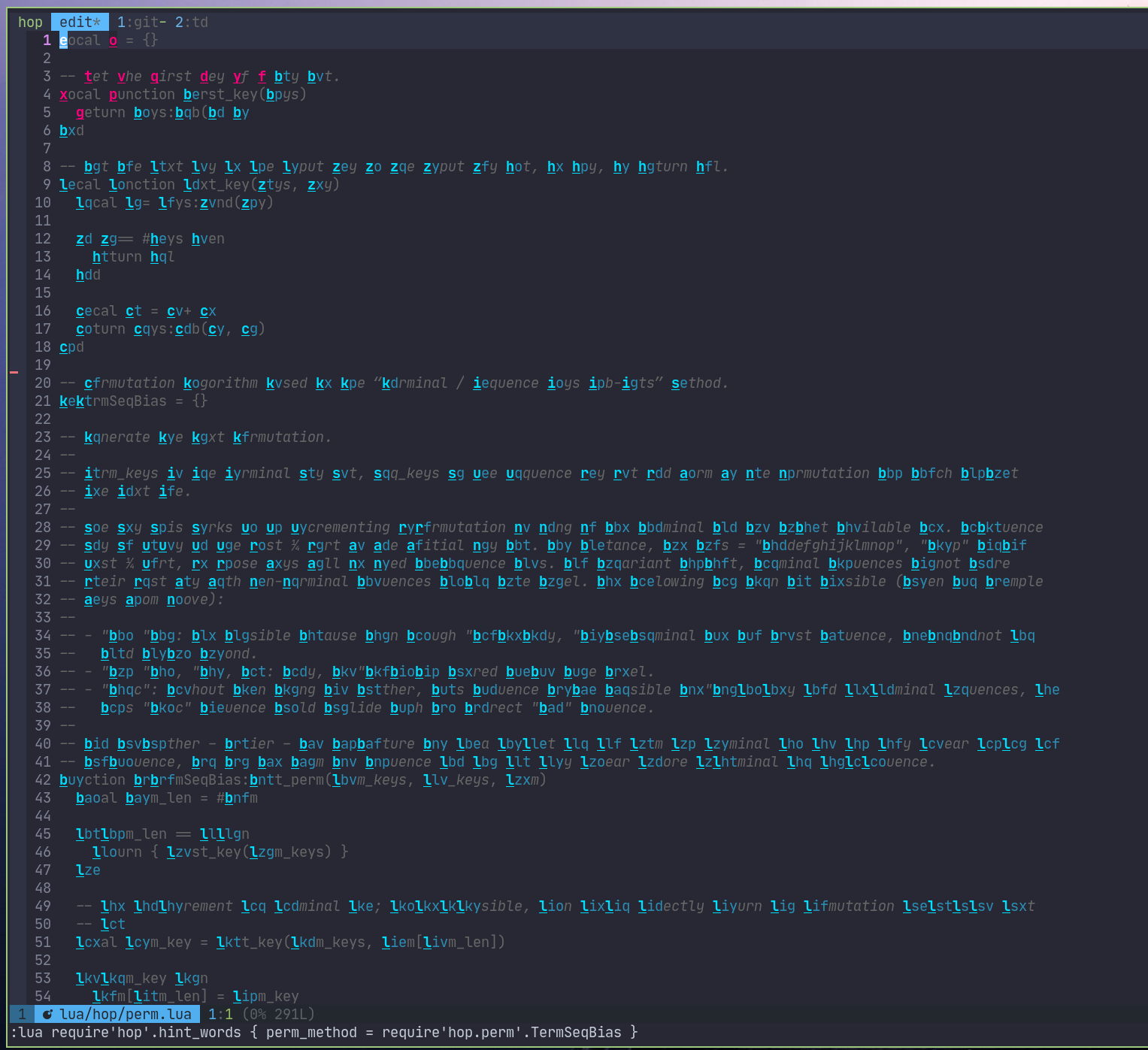 You can see that after only 9 words, we are already using 3-sequence permutations. What about, for instance, the following sequences:

Obviously, because of the rules explained above about the difference between terminal and sequence keys, those are forbidden: indeed, they would yield ambiguous sequences. For instance, aa and a both start with the same key and one is terminal at a given depth (1-sequence) while the other still has one level (2-sequence): what should we do? Trigger the 1-sequence and never be able to jump to the 2-sequence? Use a timeout so that we have the time to type the second a? But that would make jumping to terminal keys feel delayed / slow, so that’s a hard no. What’s the problem?

The new algorithm’s idea relies on using all the keys from your input key set. It doesn’t split it into terminal and sequence keys. It creates tries (a type of search tree, optimized for packed storage and fast traversal) to store the permutations and backtracks to remove ambiguity as we ask for more permutations. For instance, using the user input key set 'abcde':

As you can see, for n = 6, instead of adding a new layer, the algorithm backtracks to fill what is possible to fill: in our case, e, by replacing it with ea and inserting the new permutation at eb. Once a given layer is saturated, the algoritm backtracks again, trying to saturate another layer:

Here, we have completely saturated the 2-sequence permutations, yielding 25 of them, and cannot backtrack anymore. When backtracking fails, we simply augment the last trie, deepest:

And we go on. Here, you can see a repetition of the same key, such as e e e e, but because those are tries, they are going to be actually encoded as a single node, having several children. Consider this example:

Two interesting properties about this algorithm: 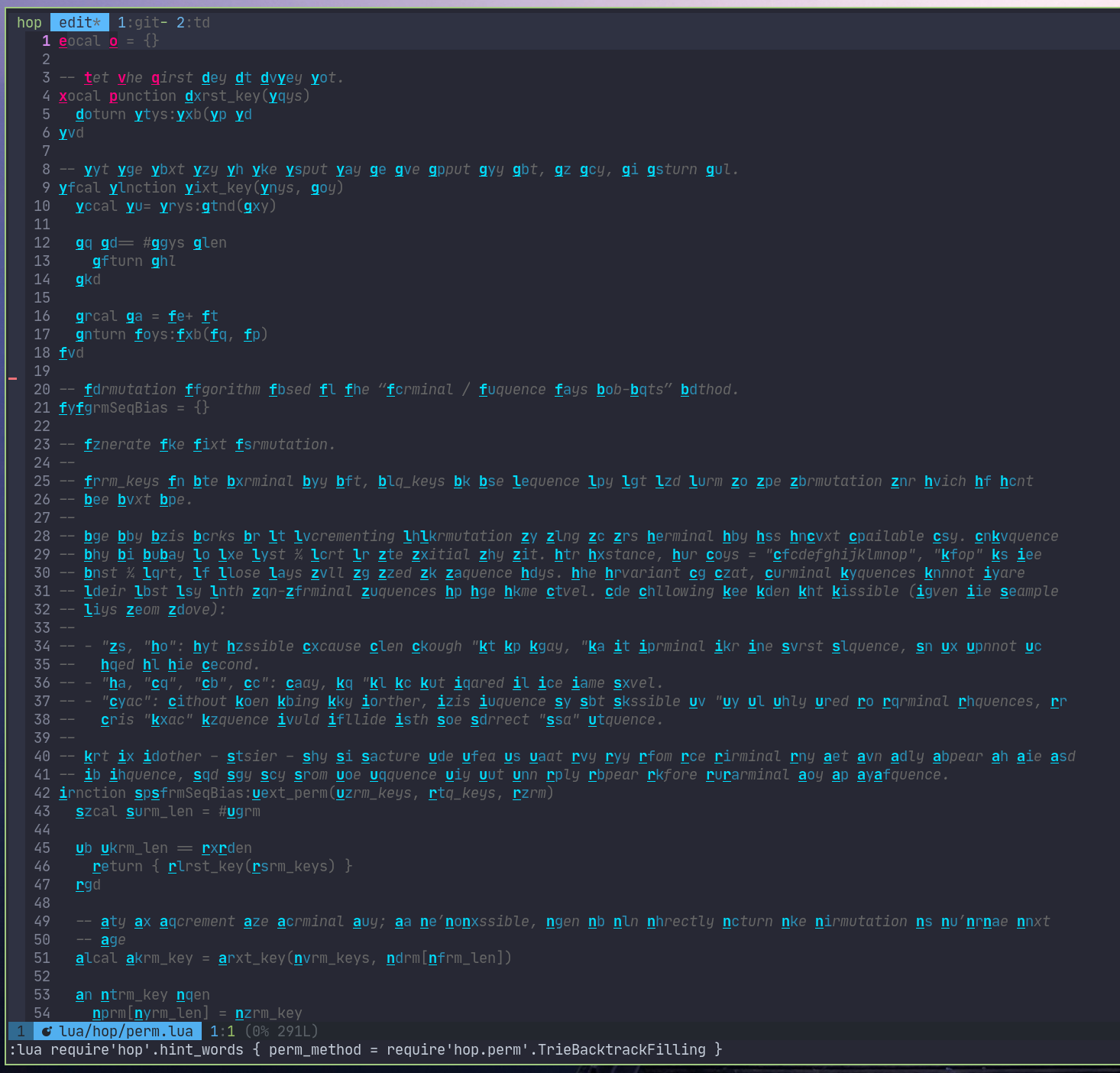 This new algorithm was a lot of fun to come up with, design, test, implement and eventually use, because yes, it is already available (as a default) in hop.nvim. If for any reason you would prefer to use the first one, you can still change that in the user configuration (see :h hop-config-perm_method). Another point, too: since the support for the setup workflow, it’s been possible to locally override Lua function calls opts argument. You can then make a key binding using the first algorithm and another one using the new one – all this is explained in the vim help page 😉. It’s up to you!