I’ve been a bit surprised for a few days now. Some rustaceans posted two links about my spectra and luminance crates on reddit – links here and here. I didn’t really expect that: the code is public, on Github, but I don’t communicate about them that much.

However, I saw interested people, and I think it’s the right time to write a blog post about some design choices. I’ll start off with luminance and I’ll speak about spectra in another blog post because I truly think spectra starts to become very interesting (I have my own shading language bundled up within, which is basically GLSL on steroids).

luminance is a library that I wrote, historically, in Haskell. You can find the package here if you’re interested – careful though, it’s dying and the Rust version has completely drifted path with it. Nevertheless, when I ported the library to Rust, I imported the same “way of programming” that I had·have in Haskell – besides the allocation scheme; remember, I’m a demoscener, I do care a lot about performance, CPU usage, cache friendliness and runtime size. So the Rust luminance crate was made to be hybrid: it has the cool functional side that I imported from my Haskell codebase, and the runtime performance I wanted that I had when I wrote my two first 64k in C++11. I had to remove and work around some features that only Haskell could provide, such as higher-kinded types, type families, functional dependencies, GADTs and a few other things such as existential quantification (trait objects saved me here, even though I don’t use them that much in luminance now).

I have to admit, I dithered a lot about the scope of luminance — both in Haskell and Rust. At first, I thought that it’d be great to have a “base” crate, hosting common and abstracted code, and “backend” crates, implementing the abstract interface. That would enable me to have several backends – OpenGL, Vulkan, Metal, a software implementation, something for Amiigaaaaaaa, etc. Though, time has passed, and now, I think it’s:

The idea is that if you need to be very low-level on the graphics stack of your application, you’re likely to know what you are doing. And then, your needs will be very precise and well-defined. You might want very specific piece of code to be available, related to a very specific technology. That’s the reason why abstracting over very low-level code is not a good path to me: you need to expose as most as posssible the low-level interface. That’s the goal of luminance: exposing OpenGL’s interface in a stateless, bindless and typesafe way, with no or as minimal as possible runtime overhead.

Today, luminance is almost stable – it still receives massive architecture redesign from time to time, but it’ll hit the 1.0.0 release soon. As discussed with kvark lately, luminance is not about the same scope as gfx’s one. The goals of luminance are:

To achieve that, luminance is written with several aspects in mind:

luminance has received more attention lately, and I think it’s a good thing to talk about how to use it. I’ll add examples on github and its docs.rs online documentation.

I’m going to do that like a tutorial. It’s easier to read and you can test the code in the same time. Let’s render a triangle!

Note: keep in mind that you need a nightly compiler to compile luminance.

Getting your feet wet

I’ll do everything from scratch with you. I’ll work in /tmp:

At the time of writing, corresponding versions are luminance-0.23.0 and luminance-glfw-0.3.2.

Have the following [dependencies] section

Everything should be fine at this point. Now, let’s step in in writing some code.

The main function creates a Device that is responsible in holding the windowing stuff for us.

This block will catch any Device errors and will print them to stderr if there’s any.

This loop runs forever and will exit if you hit the escape key or quit the application.

Setting up the resources

Now, the most interesting thing: rendering the actual triangle! You will need a few things:

Position, Color and Vertex define what a vertex is. In our case, we use a 2D position and a RGB color.

You have a lot of choices here to define the type of your vertices. In theory, you can choose any type you want. However, it must implement the Vertex trait. Have a look at the implementors that already exist for a faster start off!

Important: do not confuse between [f32; 2] and (f32, f32). The former is a single 2D vertex component. The latter is two 1D components. It’ll make a huge difference when writing shaders.

This will pass the TRIANGLE_VERTS vertices to the GPU. You’re given back a triangle object. The Mode is a hint object that states how vertices must be connected to each other. TessVertices lets you slice your vertices – this is typically enjoyable when you use a mapped buffer that contains a dynamic number of vertices.

We’ll need a shader to render that triangle. First, we’ll place its source code in data:

And add this to your main.rs:

Note: this is not a typical workflow. If you’re interested in shaders, have a look at how I do it in spectra. That is, hot reloading it via SPSL (Spectra Shading Language), which enables to write GLSL modules and compose them in a single file but just writing functions. The functional programming style!

Same thing as for the tessellation, we need to pass the source to the GPU’s compiler to end up with a shader object:

Finally, we need to tell luminance in which framebuffer we want to make the render. It’s simple: to the default framebuffer, which ends up to be… your screen’s back buffer! This is done this way with luminance:

And we’re done for the resources. Let’s step in the actual render now.

The actual render: the pipeline

luminance’s approach to render is somewhat not very intuitive yet very simple and very efficient: the render pipeline is explicitly defined by the programmer in Rust, on the fly. That means that you must express the actual state the GPU must have for the whole pipeline. Because of the nature of the pipeline, which is an AST (Abstract Syntax Tree), you can batch sub-parts of the pipeline (we call such parts nodes) and you end up with minimal GPU state switches. The theory is as following:

That deep nesting enables you to batch your objects on a very fine granularity. Also, notice that the functions are not about slices of Tess or hashmaps of Program. The allocation scheme is completely ignorant about how the data is traversed, which is good: you decide. If you need to borrow things on the fly in a shading gate, you can.

You should see this: 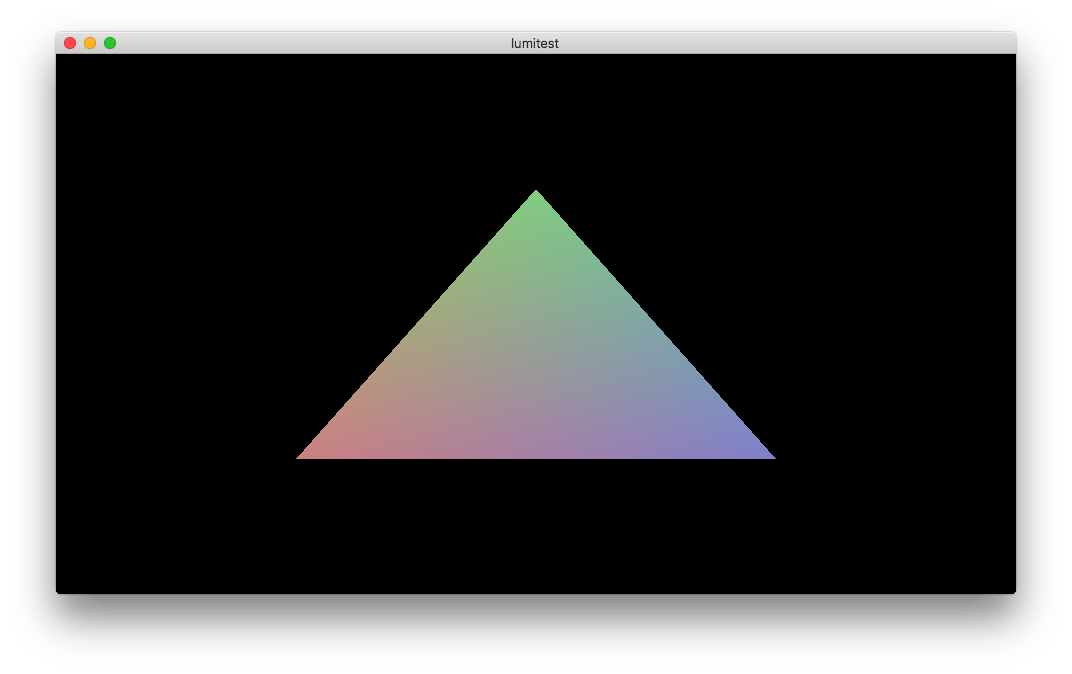 As you can see, the code is pretty straightforward. Let’s get deeper, and let’s kick some time in!

We have the time. Now, we need to pass it down to the GPU (i.e. the shader). luminance handles that kind of things with two concepts:

Uniforms are a good match when you want to send data to a specific shader, like a value that customizes the behavior of a shading algorithm.

Because buffers are shared, you can use buffers to share data between shader, leveraging the need to pass the data to all shader by hand – you only pass the index to the buffer that contains the data.

We won’t conver the buffers for this time.

Because of type safety, luminance requires you to state which types the uniforms the shader contains are. We only need the time, so let’s get this done:

The UniformBuilder::unbound is a simple function that gives you any uniform you want: the resulting uniform object will just do nothing when you pass values in. It’s a way to say “— Okay, I don’t use that in the shader yet, but don’t fail, it’s not really an error”. Handy.

And now, all the magic: how do we access that uniform value? It’s simple: via types! Have you noticed the type of our Program? For the record:

See the type is parametered with three type variables:

You guessed it: we need to change the third parameter from () to TimeUniform:

And that’s all. Whenever you shade with a ShaderGate, the type of the shader object is being inspected, and you’re handed with the uniform interface:

Now, change your fragment shader to this:

And enjoy the result! Here’s the gist that contains the whole main.rs.